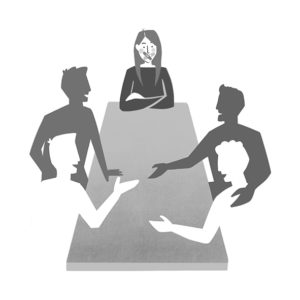 Candace is an experienced developer who before taking on the role was an associate professor in a department at another university. She was invited to join a cross university committee convened to develop a teaching and learning strategy. Her reading and experience in the field make her the most knowledgeable person at the table. Candace is resigned but not shocked when her contributions to the debate are either ignored completely, or ignored at the time then given value when restated a little later by one of her, usually male, colleagues.

It is a known concern that women are often silenced in large groups, such as meetings, particularly when dominated by men. The same is true for marginalized groups. Educational developers are not all women, nor are they all from marginalized groups, but when they find themselves in the minority with senior administrators and academics, they may find themselves subject to the same challenges. One such challenge is the experience of being silenced, sometimes literally, other times figuratively; of having their ideas repeated back to them as if they had never articulated them, or being belittled in other ways. In this chapter we explore these and other situations, and offer strategies to help address and prevent such silencing for ourselves and others.

Melody J. Wilding, in The Muse, discusses the five different types of imposter syndrome identified by Dr Valerie Young, and offers advice about dealing with each one. People who suffer from this syndrome, have a deep-seated belief that despite evidence of their success they are really not worthy of their position, and that they have been lucky to make it this far. This belief can undermine their self confidence, and that in turn can make it easier for others to silence them. The five types identified by Wilding are:

The Perfectionist - sets themselves impossibly high targets and berates themselves if they fail. Accept that failure is normal and to celebrate success without constantly finding flaws to criticize.

The Superman/ Superwoman - gets a sense of achievement from working rather than from the work itself. Constantly works longer and harder than others, seeks external validation. Find ways to set your own intrinsic satisfaction, have confidence in your ability.

The Natural Genius - has a history of doing things well first time with little effort. If something does not work out immediately they assume they are no good. See yourself as a work in progress, and focus on improving in an area you find challenging by breaking it down into manageable steps rather than trying to do it all and failing.

The Soloist - believes that asking for help is a sign of weakness. Accept that we all need help to develop and seek out appropriate support when you need it.

The Expert - measures their worth based on what and how much they know. They constantly seek out opportunities to learn more, but never feel they know enough. Try to exercise just in time learning, seek out support when you need it, rather than hoarding all learning opportunities in case you may need the knowledge in the future.

See the original article for more detail. Melody J. Wilding, in The Muse

Article in The New York Times - How to respond to microaggressions,Hanna Yoon, March 2020

"Microaggressions are the everyday slights, indignities, put-downs and insults that members of marginalized groups experience in their day-to-day interactions with individuals who are often unaware that they have engaged in an offensive or demeaning way." (Dr Sue)

Microaggressions are difficult to deal with because they are small and seem insignificant in isolation, but cumulatively can have enormous detrimental impact on an individual. In the New York Times article we are advised to pick our battles (do not try to call out every example, it is exhausting), to call on the support of others to point out when remarks are made that may be damaging for someone, and to operate self care (define boundaries and draw support from allies).

This is a form of microaggression and one that many women and people of colour have experienced.

This is the result of a culture that expects men to speak up loudly and often, and women to listen. The "hepeater" may not even realize they are doing it. The advice is to form alliances with other women or supporters, and amplify women. If someone repeats your idea as if it were theirs, confront them by calmly pointing out that you just said that. Do the same when it happens to other people.

Have you been silenced in a meeting? Did you find a way to deal with this? What works for you?

It may be helpful to consider the behaviour discussed here is a form of threat response. We all have multiple identities, some are determined by society, such as gender or race, while others are acquired by choice, such as profession or sport team affiliation. Different people will not only assume different identities, but they may put a different value on the same identities. If a highly valued identity is threatened we may respond strongly to that perceived threat but ignore or even not notice a threat to lowly valued identity. If someone accustomed to being listened to and respected in part because of his identity as a man, for example, perceives that power to be threatened by a woman, they may respond in a way that can be perceived as a threat by the woman. Another man in the same situation may not respond in the same way, and another woman may not perceive the response of the first man as a threat. It is not the sole responsibility of the person perceiving the threat to deal with it, it is also the responsibility of the rest of us to be aware of the potential to present a threat to others and to respond appropriately.

See Petriglieri, J.L. (2011) Under Threat: Responses to and the Consequences of Threats to Individual's Identities,The Academy of Management Review, 36 (4), p641-662

In the 2009 report by the Institute for Government, Mindspace explores the way behaviour can be manipulated by appealing to our desire for group cohesion, and the value we place on the person delivering the message, rather than the message itself.

Mindspace - (2009) Institute for Government - a report on influencing public behaviour.

This work is licensed under a Creative Commons Attribution 4.0 International License.